Which are the worst – rabbits or deer? The answer is deer.

Yesterday morning there were 50 flower buds on the Bela Lugosi
day lilies. Some were just hours away from opening. I went out early this morning to check on them and found this:

Remember what a struggle it was to get these going (due to a different kind of garden destroyer)?  I was so looking forward to the bloom period this summer, my last in New Jersey. I can’t wait to get to Florida where the only animals I have to worry about is alligators and snakes.m

If the lawn guy doesn’t blow these away today, then surely the wind/hail weather event predicted for tomorrow will take care of them. I’ll be sorry to see them go.

Things are starting to get back into shape on my personal slice of heaven.


My trim little semi circle of yellow Knock Out Roses has been wildly successful so of course that means Sami wants to teach them a lesson with his chain saw. This is what he hates about exuberant abundance:
And that of course is exactly what I love about it. He sees it as untamed nature encroaching on human territory and I see it as a sign of my gardening mastery – plants so successful they cannot be held back. RAWR!

I offer these pictures as documentation of how lovely they once were just in case they should go missing by reason of “I thought they were weeds.”


He may have a point about exuberant abundance encroaching on the sidewalk.

I have an an interest in a business called Mr. Ice Bucket. Not an interest like I’m an investor – just a fascination with them. It’s ” … the oldest continuously managed Ice Bucket manufacturing facility in the world!” They manufacture ice buckets (among other things) for retail sale, corporate gifts and wholesale to the hotel and hospitality industry.

The current crop of ice buckets are pretty good. And why wouldn’t they be? They’re made by local ice bucket artisans. In New Brunswick NJ. Right off of Rt 1. But I see that they change their line frequently to keep up with  design trends and probably to create desire in ice bucket consumers for continuing ice bucket acquisition. In fact, the one I just bought as a Christmas gift doesn’t seem to be in production any longer.

So that got me to thinking that since this company has been making trendy ice buckets since 1965, there must be some vintage psychedelic or pop-art ones still floating around. And sure enough, eBay does not disappoint. I didn’t find any 60s buckets but how about this late 80s-early 90s fad of tropical flora and dressed-up monkeys?

I mean look at this thing. Once you have gotten your fill of the dressed up monkey and start admiring how the little frosty stand-up circle knob matches the frosty handle, well … I mean.This is really a thing of beauty. And that is stated non-ironically in case that wasn’t clear.

It is a wonder to me that it has lasted this long on eBay. I can’t buy this because I already have 2 ice buckets maybe 3 and I’m supposed to be getting rid of stuff in anticipation of a move to a smaller house in a warmer retirement location next year and its not going as well as a certain spouse thinks it is, but if I was already in Florida I would have owned this so fast the turban would have flown right off that monkey’s head.  And I’m not saying you should buy it either. I’m just saying that a thing like this deserves to be looked at and admired and considered. You should at least go and see it. Only 15 hours left. 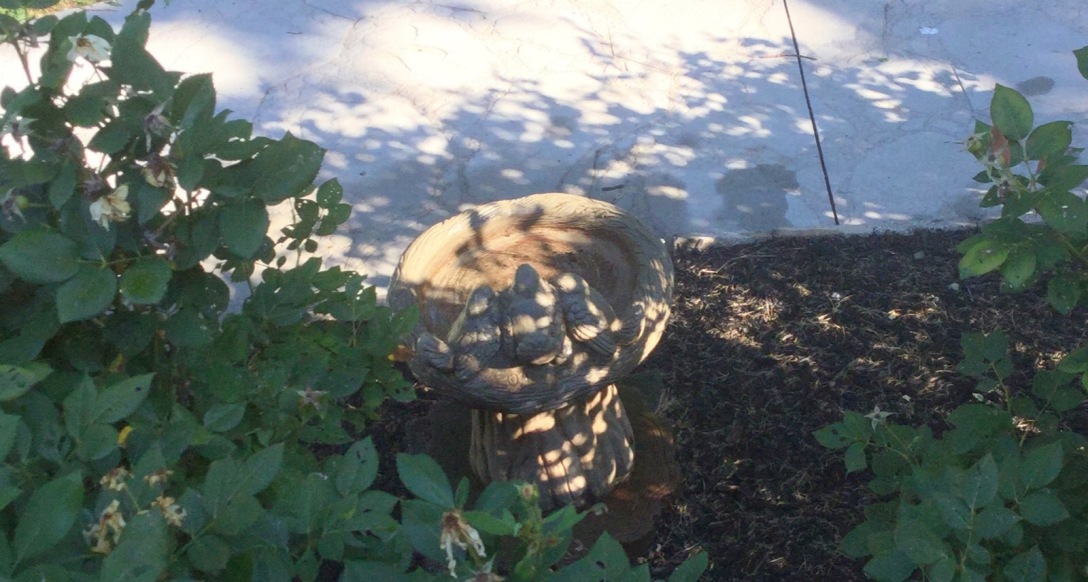 My neighborhood is filled with early risers. Early outdoor workers, I should say. Does every neighborhood have these? They’re out there vacuuming their cars and hosing their plants long before I push the button on the coffee maker. In the winter, the pleasant scraping of their snow shovels lulls be back to sleep.

Here’s the thing – they are silent. I don’t think they’re trying to be quit out of respect for sleeping others. I think they are alone with their thoughts, just them and their hoses. Every once in a while, I’ll join them.

Although I do rise early, I prefer to spend my time drinking coffee on the deck and cruising the Internet on my iPad. If I do engage in some weed pulling or clipping away some of those pickery vines that like to tangle up in my shrubbery, I like to be noticed. So I have no problem shattering the tranquil vibe they all have going on by shouting out “OH YOU SON OF A BITCH!” if I should happen to shake up some bees and they retaliate by heading for my cleavage or trying to fly up my nightgown.

Sometimes I’ll say “OH YOU DIRTY BASTARD!” but that is more of a mutter and I use it in the early evening when a dirty bastard rabbit successfully avoids getting smashed by my shovel.

If I should ever meet up with a snake, I do not have an expletive ready for that encounter.

FYI for anyone concerned about the fate of Gods little creatures that cross my path, let me just say that I do believe that God wants us all to share the earth together just not in the suburbs.

UPDATE: Pulled weeds, hosed things and then I came inside to de-fur and wash two dogs beds and vacuum the first floor in preparation of the dog’s triumphal return from the groomer. All on the same morning. It was utterly exhausting. Now I have to take Advil and a nap. Later on I can resume my customary lifestyle activity of shopping for earrings and makeup.