I’m trying out a new catch phrase – here it is:

What do you think of it ? Will it catch on?

Like Loading...
I’ll try to make this short.
/In early March I spent a ton of money on a fresh haircut and highlights. Then I went into self imposed isolation and only my husband and the Amazon van driver got to appreciate the effort. Turns out it was the worst haircut I ever had and I had to look at it and try to ignore it every single day since. Now it’s grown way past the stage where I should have had at least two more hair cuts and now I look like Mary Berry if Mary Berry was a zombie.
/Last week, I got up early on Grass Cutting Day and went out to pull weeds from around the outside of the pool screen so I wouldn’t be humiliated when the grass cutters got here. Long story short, when I fell backwards, I landed on my butt like a baby just learning to walk and then my top half continued on it’s own slammed backwards onto the wet grass. My brain felt like it came loose from my skull for a while but that only lasted until that evening.
[Interlude: I couldn’t get up by myself and no one was around so I had to wait one hour and fifteen minutes sitting in the wet grass and watching surface mud sink deeper into my pale blue terry cloth slippers until my neighbor came out for his coffee and came over to help me up. By that time I was completely soaked and my t-shirt was sagging but mercifully and by rare coincidence I was wearing a bra so no free show for him. He was probably looking at my hair anyway. UNCOMBED zombie Mary Berry.]
/I thought that was the end of it until the next morning when I took that lovely first sip of coffee and jumped up right to the moon. Turns out that the double impact with Mother Earth meant that my teeth banged together two times , cracked one or some molars not sure yet and exposed a nerve. It was so painful that I didn’t even care that I looked like zombie Mary Berry.
/Later that day, I potted up a baby flapjack plant which is my new favorite plant and took it over to leave on his front door step to thank him for lending a helping hand.
/On the weekend, a week-known local musician lives on my street and he got his band together to give a free concert in his driveway for the neighborhood. I’ve been strict about keeping my husband well away from the threat of contagion all this time, but he kept bringing it up and looking at me hopefully so see if it would be okay.  Meanwhile, the street is a short cul-de-sac with only 7 houses on each side, so I spent a few days calculating how many individuals who believe that the stay-at-home mandate in Florida didn’t apply to them would be roaming around with neither mask nor respect for social distancing. But when the time came we made a plate of snacks, brought a cocktail for him and a bottle of red for me out to the end of our drive way and settled in.
/It was so much worse than I thought it would be – kids were careening around on bikes and skateboards, half naked teens were standing on the cabs of pick up trucks and there were more motorcycles and golf carts filled with slap happy adults then I could ever imagine would be in this neighborhood. Yet, we felt adequately isolated on our own patch of cement sidewalk compared to the roiling mass of celebrants who were dancing in the cul-de-sac (where the free margarita bar was located.
/Overall, it was good. My husband was so happy and he didn’t even mind very much when I got halfway down the wine bottle and started channeling my inner Lucy Ricardo by explaining something to him that had to be urgently explained right then and there while pouring another glass for myself and he ended up partially covered in a pretty nice 2017 Malbec.

/Anyway, that’s what’s been happening around here. You?

Staying at home is good for finishing projects that got off to a great start but then languished incomplete due to waning interest.

Spray paint. More than 2 years and 7 months ago, I brought home some sad patio chairs that I intended to paint beige with teal straps. I did mange to paint one chair solid beige during the first week but then lost interest in going further. A week ago, I pulled out the three year old can of teal spray paint and finished the job. Sort of. There’s still one chair untouched.

Needlepoint. Many years ago maybe 6, I saw a beautiful English needlepoint kit on eBay that I had to have. I made a high bid on it but then went on a business trip. The auction closed while I was sitting at an airport gate and someone outbid me. I was crushed. And that is why 2 years ago, I saw the same kit, brand new, on eBay again. I was so happy and thankful that I got anther chance at it that I didn’t want to risk losing it again so I  paid the But It Now price. It arrived within days and then sat collecting dust while I alternately ignored and cursed over the work-in-progress I had already going on. Very few additional stitches but a lot of curses happened on the WIP until three weeks ago when I just bought another frame and and started work on the beloved. It’s fast going , is simple enough that I can hold conversations or follow a tv show in the background while I stitch. As you can see, I already have about 2 inches done across the top. 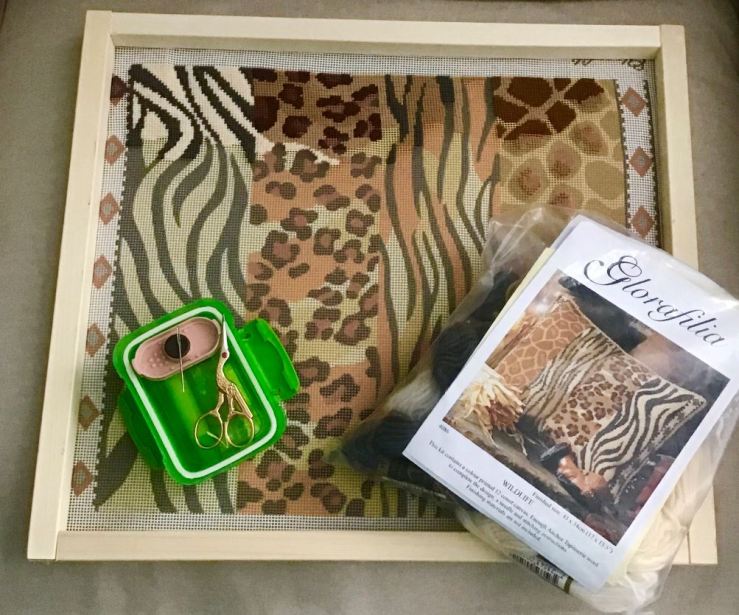 Doorway plants. This isn’t much to write home about yet – see me in about 3 months when it all fills out and it’s magnificent – but I never got the doorway plants right before. The entrance looks symmetrical but it’s not so I needed similar plantings in matching pots of different sizes. I think this is it. I don’t expect you to get all excited about this especially since I half-assesd it and worked around plants that survived sun and freeze in other locations.  The photo is noteworthy to show you a slice of my life that is hardly meaningful to anyone else but charms me every time. I put those blinds up on the sidelights of the door to block Stedman from licking the glass whenever anyone came to the door.  Or a car drove by. Or the mail truck pulled up. Now whenever the glass separates us, he lifts up a slat with his nose. I think he’s trying to see out but he never managed to actually get a look. Every time I come back from being out, I’m greeted by crooked blinds and a little black nose. It’s charming. 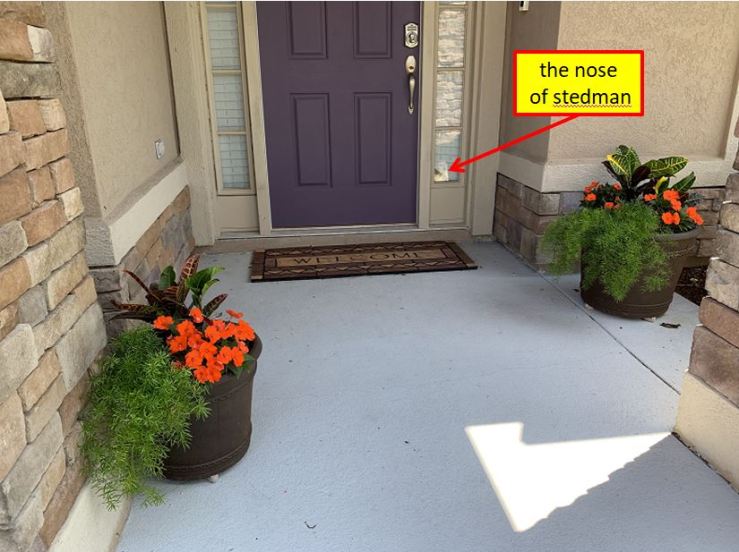 I’d like to be able to say that i fonsihed recovering the dining room chairs, or the chair in my oyster-painting studio, or the gold chair that I resprayed brown and now I need a new piece of fabric to cover over the hot pink zebra, but none of that has happened. Maybe I’ll get that all done during the stay at home order for Wu Flu Part 2.

My daughter, who is quite the comedian, sent us a pair of matching face masks. 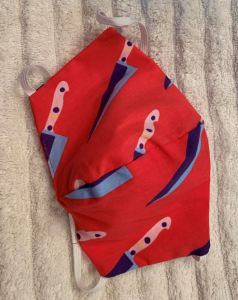 Believe your eyes. The fabric pattern is stabby butcher knives. If anyone violates my six foot safety zone, they’ll be close enough to see the knives and get the hint. This strategy has proven to be politely effective about 50% of the time. My previous strategy if anyone blatantly disregarded the sanctity of my six foot safety zone, was to slow roll my handicap scooter in their general direction, bug out my eyes and say ooh ooh ohh as if it was out of my control and I had nothing to do with it. THAT was 100% effective.

Today a new box of Ziploc bags fell from a high shelf in the pantry and struck me on the cheek.

Yesterday I watched a cluster of four baby centipedes march through my dining room. They didn’t make it.

Also yesterday, I made myself a face mask out of a white cotton napkin which I acquired on my last first class trip on Continental. When I put it on to go out for milk, I looked like I was being smothered by an old school baby diaper.