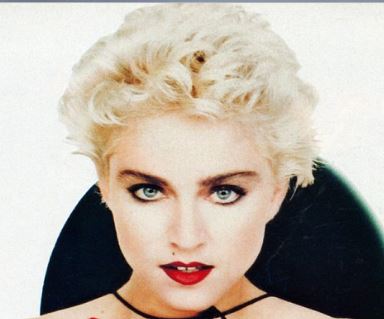 This is what I’ve been saying for years: cosmetic surgery doesn’t make old people look young; it makes them look old in a different way.
Camille Paglia: How to Age Disgracefully in Hollywood  “The main problem facing today’s aging women is not sexism but the lingering youth cult of the 1960s.”

I’m not against cosmetic surgery per se. I guess what I’m against is mature people , mostly women but men too – behaving/dressing just as they did when they were young. the illusion is only good if it is good at all – until they stand next to a  genuine young adult. Then they look ridiculous.

Mature people with reasonable (i.e., modest) cosmetic work and age-appropriate clothing are all around us  they’re just the exception to the rule. BravoTV is not responsible for creating that rule but they sure did hop on the bandwagon. I’d sure like to see one Housewives wedding where the bride is less than 50 years old and is not dressed like a stripper.

This article focuses primarily on how Madonna is stuck in the past and is caught up in maintaining her physical appearance, wardrobe and interface with the world as if she was still 25. Frankly, I was never much a fan. In fact, the only word I ever used to describe her during her prime was “unsanitary”. But then when she did the half-time show at Superbowl XLVI, I was very impressed that someone in her mid- 50’s could gyrate and jump around like that in high heels for for a steady 13 minutes. Good knees! Plus, you’ve got admire anyone who has become a master at their thing, and she sure is a master of energetic performances in very large venues.

Madonna’s photo here is not flattering but I believe it’s an accurate representation, I saw her recently on Car Pool Karaoke and thought that there was something Baby Jane Hudson about her. She also stuck her butt and her begonia in James Cordon’s face , behavior that most mid-58 ladies do not engage in. I get that she’s an enterprise and the cash flow would shut off if she gave up this persona, but even so. We have seen enough, Madonna.

Other past-their-prime worshipers of youth culture should take note.