How many years can that greasy duckling get washed with Dawn dish detergent? I mean, it’s the same duck since the Exxon Valdez spill in 1989,  isn’t it? One would think the feathers would have been worn clean off by now.

Disclaimer: I am neither pro-duck nor pro-oil spill but I can think to better things to do with my time than washing a duck. It might sound cruel but it’s a duck. Just get another duck.

UPDATE: Oh great. Now I’m trapped in googling uses for Dawn detergent. I think those ads would have broader appeal if they let the ducks alone and concentrated on making ice packs out of Dawn and a zip lock bag or unclogging toilets* by pouring in a quantity of Dawn. That would be useful to the GenPop**. After all, how many of us really are going to have occasion to wash a greasy duck? Far more individuals are going to involved in clogging up toilets or recovering from a bar fight than duck washing.

*There’s a huge portion of Etsy types around who devote themselves to making toilet bombs. Not what you think they are! They’re toilet bowl cleaning fizzing tablets made primarily of vinegar and baking soda.  Which I believe is the recipe for an elementary school volcano eruption. What could go wrong?

True story: One night I went to bed and I woke up the next morning completely obsessed with Spode Blue Room. And so at the first opportunity when someone asked me what I wanted for Xmas, I shot out a request for a Blue Italian 16 oz mug. Now I’m search for a butter pat or pin dish to use as a teabag holder.

Maybe I was too hasty with the Blue Italian request. In truth, I am both drawn to and repelled by the Indian Sporting Mugs. Look a these things:

I never felt like I had a past life, but if I did have one I’d want it to be the British Raj. ( and of course I’d be a raj-er, not somebody getting raj-ed. The truth though is more likely closer to my own ancestry where the guy on the elephant here is a Cossack and I am the poor beast getting ripped limb from limb. Anyway, let’s have some tea!

Right – so about those butter pats. What a wacky company Spode is – it’s the very definition of the word “traditional” and yet it’s responsive to the events of modern times. Here are two little butter pats on eBay right now:

Although I’m really going for a Girl At Well vibe, I cannot get over that depiction of Vikings/Roman soldiers and Astronauts sandwiched between crude farming implements and the planet Saturn. Does the UK even have a space program? And I think that one in the back might be hommage to the Hitchhiker’s Guide to the Galaxy. Someone needs to explain this to me. In any event, I really think I need to park a wet Lipton in this! 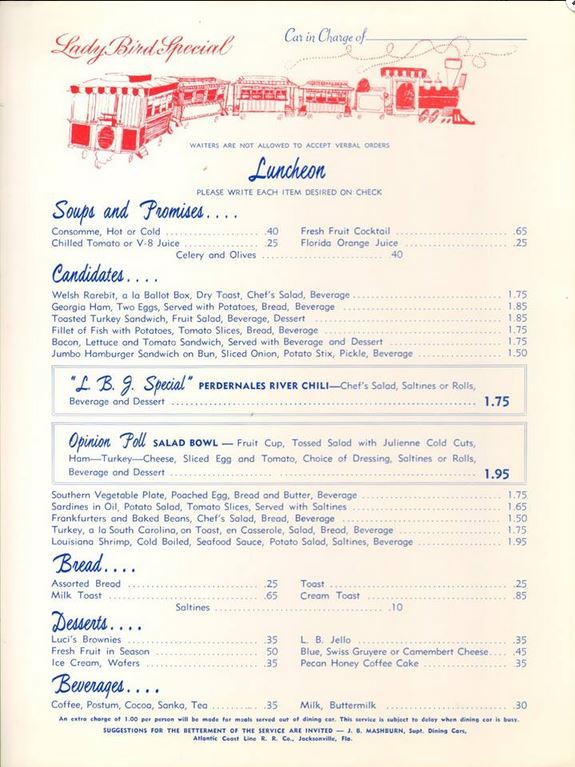 My favorite part of this is how the menu misspells that east Texas river to align with the way Lyndon always mispronounced it.

“She often used southern cuisine to win people’s affection, serving state specialties and distributing recipes for particular southern dishes. Her appeal to the southern appetite worked to identify her with her southern roots. In Wilson, North Carolina, a local politician introduced Lady Bird by saying she was “as much a part of the South as tobacco, peanuts, and red-eye gravy.”

How brave was that Lady Bird – such a great strength of will! And what a fine moral compass she had. She is completely underrated and undervalued in every area except wildflowers. That was no small thing but it’s the part of her legacy that is most well know by today’s generation of nudniks.

“The nation was still stunned from the assassination when the Johnson’s finally moved into the White House.  Lady Bird was aware that she could not compete with the glamour of Jacqueline Kennedy and did not attempt it.  Instead, she sought causes to which she could give her name and her energies.  She made headlines during the 1964 campaign when she became the first First Lady to go on a campaign trip for her husband by herself.  She styled the tour train “The Lady Bird Special,” and she made 47 stops and covered over 1600 miles.  Three days later, when the tour ended in New Orleans, Lyndon joyfully met her at the train station.  The “Secret Weapon” had all but defused much of the anger felt by Southerners toward Lyndon’s Great Society legislation.

And now it’s entirely appropriate that we gaze once again upon the Johnson White House China, which was deigned in part by Lady Bird herself.

Any way, 27 years worth of subterranean hoarding is now soaking wet so the two vibrant and sturdy homeowners* whose children have moved too far away to be of any help are bringing wet crap upstairs to the kitchen for triage and disposition. Yesterday, a surprise emerged.

This is the china that my father collected for me from a local supermarket long before I was married. I never liked it** and I never used it and I certainly would never have picked it out for myself. In fact, at one point I gave the whole shebang to my married sister who was glad to have it.

**Stay strong, Suzette. Don’t start thinking about a cranky, silent and no-frills authoritarian planning a surprise gift of luxury and beauty for his daughter who was grown and living on her own and maybe he missed her?

It took me a while to think how it ended up back in my basement but it came to me as we were peeling the soaked newspapers off of each piece. When my sister broke up her home, she brought it back to my mother’s house and it stayed boxed up in the attic until we cleaned out the old house years later. The inside of box was topped with a neatly folded newspaper from April 2005. The headline announced the death of Pope John Paul II.

Anyway, I still don’t want them. And that is saying something from a person who cannot resist dinnerware of any kind. I thought I might take a go at selling them on Craigslist so I took a look this morning to see what else was listed and to get an idea of pricing for “China service for 8” and guess what? I found a whole bunch of dishes I would like to own. Act surprised.  Actually, I’m relieved that my Dish Acquisition Mechanism is still functioning.

Will any one want to buy this? The name of this pattern is Golden Autumn and the floral pattern is gold and orange and light brown so I have that going for me. I figure I would write something about “your Thanksgiving table” and set the price at $58.00 – which works out to one dollar for each perfect piece plus one free gravy boat with a chip in it. Priced to sell! I’m not interested in making money on this – I just want it #1 out of my house #2 to go to someone who actually wants it and #3 out of my house.

I imagine that this is the first of many surprises to come up out of the watery depths. Can’t wait to see what today brings.

Behold the lamb of butter:

Behold the bunnies of Lenox: 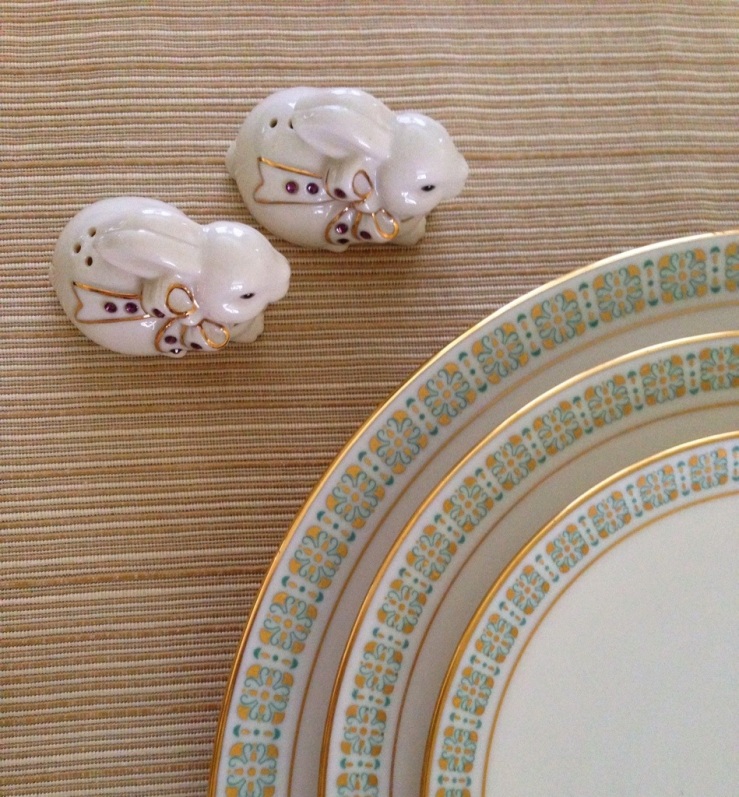