Something tells me the hotel booked for me is trying hard to put a positive spin on a "petite one double-cozy bathroom-no view" room by throwing in a bathrobe. It's not working. #businesstravel #ontheroad

I’m headed to Denver at the end of the month.

Love the Jacksonville International Airport but not too thrilled with the limited number of non-stops that fly in and out of there. I finally discovered that Southwest has one non-stop daily to Denver and back so that’s my go-to airline now. (I was totally wrong about their customer service, which is wonderful and fear about their treatment of overweight people, which has not been an issue for me … yet). Also, love their heart-shaped cocktail stirrer. Would be better if they could put a little booze into their $5 G&Ts but I guess you can’t have everything.

Denver is a big convention town so aside from the constant flood of business travelers clogging up the hotels, when a convention is in town you are lucky to get a room at all in the downtown area. I suppose in light of that fact that I shouldn’t complain about the PETITE ONE DOUBLE-COZYBATHRM-NO VIEW booking that my corporate travel department came up with but I am kind of dreading this. I’ve been to this boutique hotel before in a regular room with a queen bed in it and I could hardly roll the desk chair back enough before it hit the side of the bed.

You bargain your way down to $20 for a bent and rusty Craigslist find. Then you add $20 worth of sandpaper, rust reformer and sparkly Vintage Copper spray paint. No charge for the elbow grease. BOOM – a trash hunter's success story. #101viewsofthepatio #DIY #spraypaint #rustoleum #bakersrack #classicretrodesign

I wish I could convey to you the mesmerizing sparkle of Rustoleum’s Metallic Vintage Copper Spray paint. You can get a hint of it in this photo but in person, its hypnotic. I think so anyway. Although my opinion might be influenced by the fumes.

This was a great Craigslist find. It’s got the retro design elements that I love, matches two steel mesh tables I already have (one painted the same; one still dull black and awaiting its turn to be sparkled) and it’s the right size for this corner. It does kind of spoil the quasi-mid century vibe I had going on out there but I am what I am and what I am is not a purist. You can see how rusty it was but you cant really tell that the back is not entirely straight and the top two shelves lean slightly forward. But for my purposes, it’s fine. And my purposes are to load it up with plants and tasteful accessories and a minimal amount of utilitarian objects.

When Sami saw the finished product , he thought the coloring was too dull and didn’t have enough contrast compared to the wall color. I had to remind him that my decorating strategy is to have a decor foundation as bland as possible so that when I inevitably go overboard with the doodads,  the base will fade way and the oddities will be showcased. And then I begged him to stop me from putting things on the shelves for at least a week so the many layers of primer and top coat can properly cure. 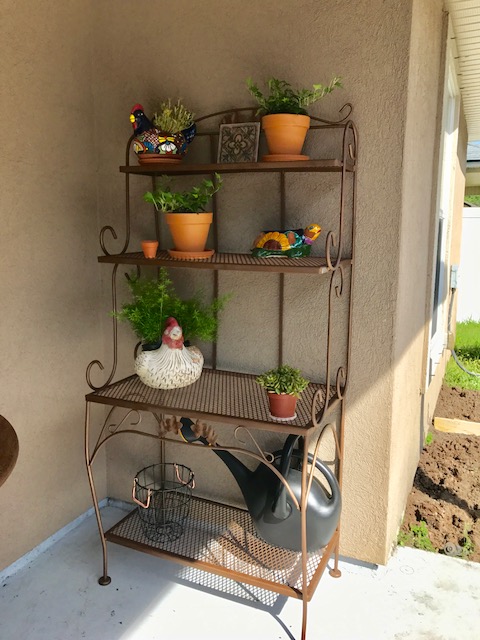 This is only what I couldn’t help accumulating in only 2 days. I have two more Talavera planters to add and some nice little battery operated tealights and 3″ tall mason jars to put them into. It was all I could do to hold back from buying a few mini-gnomes but I did manage to resist that impulse. Somewhere along the line, I have to fit in a wire basket of suntan lotion and bug sprays, plus a waterproof container for the outdoor ceiling fan remote control. Maybe I can hide those behind a chicken.