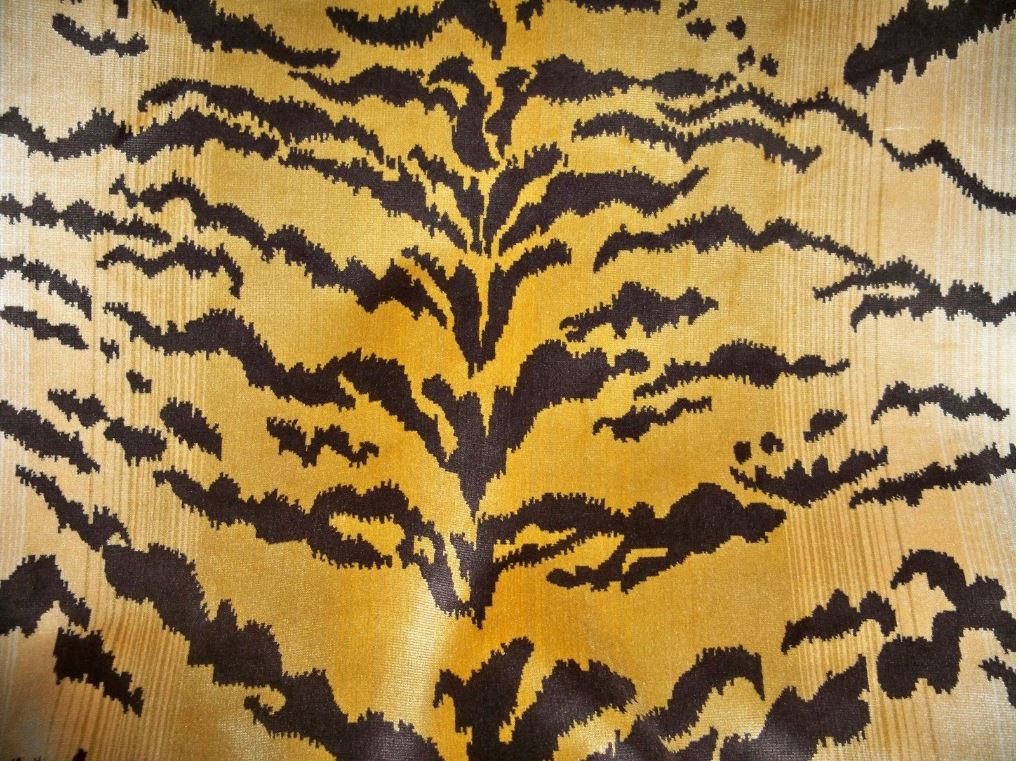 I got the idea that I should make a pillow that was a simple tiger skin pattern, so I started searching for vintage or modern kits. Unfortunately, all I could come up with was hodgepodge designs of several  animal prints mooshed together onto a single canvas  or representations of tigers before they were skinned. So I googled “tiger skin pattern” and came up with a  wealth of images. The one I was drawn to was this one:

Naturally, it is the most sought after fabrics and retails for about $2,000.00 per yard. Williams-Sonoma and this other place offer a made up pillow that sells for $250-$500 depending on the size you want. And guess what fusion of style and garish pop culture is relevant to this topic? Bravo’s Real Housewives! Carole Radziwill of Real Housewives of New York has a sofa upholstered in the stuff.

The sofa was designed for Carole’s mother-in-law, Lee Radziwill  in the 1960s. Lee gave it to her son Anthony, who later married Carole. Anthony died and Carole has the sofa. It’s the only thing in her entire apartment that has any personality at all except for that long mirror between the windows. CArole said the sofa was worn and ripped in places but she loved it an would never give it up. Kudos to her for that; kudos to Lee Radziwill for investing in something so timeless and well made that it remains covetable 60 years later. (Carole recently did a minimal apartment makeover and the ripped fabric on the arms seems to have been replaced with new – a gutsy move indeed. Maybe the shredded piping as replaced as well?)

Carole’s pretty cool – definitely the best of the bunch, moral compass-wise – and has a  demeanor that is difficult to ruffle and is able to give measured responses that are not full of shouted curses, which is the norm for any RH franchise. Still, I have to think that Lee must be something less than approving of Carole’s involvement with this show. On the other hand,Lee is Jackie O’s sister so she is probably very adept at shutting out questionable choices and behaviors, thanks to close proximity to the Kennedy clan.

But back to me. I don’t know. Maybe I should drop the tiger skin idea and  stick to my original Scalmandre zebra obsession and do up a pillow in one of these colors?

In truth, it’s This Is The Moment I’ve Waited For Redux. Hillary Clinton is going to (re)kick off her presidential campaign tomorrow from Roosevelt Island aaand there’s going to be “airport-style security” for the event. Which I guess means that she will not be wearing shoes and a government employee will be groping her underwire.

I could spend time writing it up here but really, this picture is all you need to know:

No word on how Hillary is going to get on or off the tip of that little island without mingling with the little people, but my guess is this: she’s going to arrive by specially commissioned boat with a clever yet meaningful name (the Eleanor Rowsavelt?  the Jackie Row?) surrounded by an honor guard of tug boats shooting up streams of water like they do when a new ocean liner sails into NY Harbor for the first time. Imagine it: the crowd awaits. Tug boats slip up next to FDR Four Freedoms park unnoticed until they commence synchronized spraying. A luxury speedboat moves forward and emerges from the spray and there’s a dewy Hillary standing on the bow, just like Barbra Streisand when she was chasing after Nicky Arnstein.

IN FACT that would be a great campaign theme song for Hillary’s re-announcement – an in-your-face message to the media trying to rain on her inevitability parade. Oh man, I hope no one  forgets to order two dozen yellow roses for Hill to clutch as she makes her entrance.

This is a really great idea. Two boats the (the Tag A Long and the Oval Orifice) flanking but slightly behind America’s Mom – Chelsea on the right dressed up in yellow rubber like the Gorton Fisherman but handknit by Oscar de la Renta on his deathbed. BJ Clinton on the left wearing a raincoat of another kind. Carlos Danger alltogether without rubber. Huma signaling her brothers by semaphore flags that no one is watching the Statue of Liberty.

How would she get off? – I don’t know. Maybe she’ll slip quietly underground for an exclusive donor’s dinner in the maintenance bunker. Or maybe a sparkler-bedecked platform will lower her into the water – a la Esther Williams – where you should excuse the expression Navy Seals await to swiftly bring her back to the surface while the tug boats start up the spraying again to divert the eye.  And to think I started this post planning to speculate on why no one has ever seen Hillary’s toes. But then … 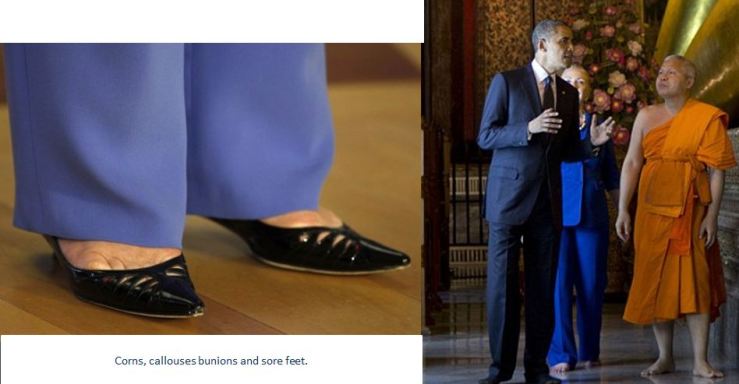 In other news related to America’s royalty, it looks like irrelevant American Princess Caroline Kennedy has been recruited to carry water for Obama’s failed trade agreement: 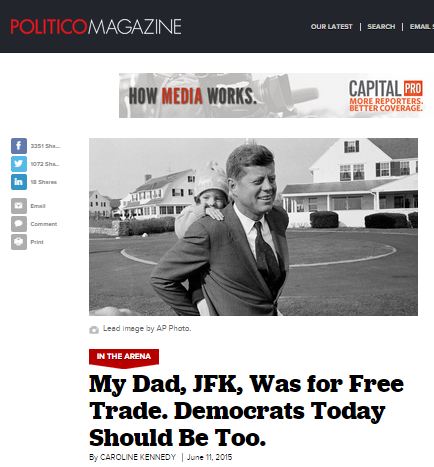 Honey – your dad, JFK, was also for sharing sex partners with his father and brother so sit down and shut up.

These are the drafts that I have recently started in my blogging folder:

There are about 20 more but I am ignoring them all to devote my time to something much more important.

Opening today at the LBJ Library 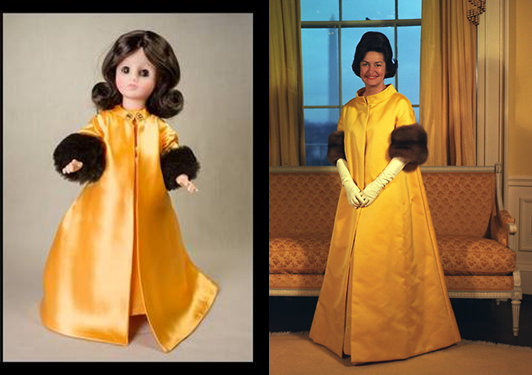 *I’m not linking them because today is the founding of the Red Cross in 1881 and they chose to go with a picture of a dead Kennedy instead of The Angel Of The Battlefield. Here – let me fix that:

Caroline Kennedy Listen, I’m no fan of Caroline Kennedy. Life’s cruel fates have distilled all that Kennedy drive, all that Bouvier style, all that citizenry love and expectation down into this bag of human disappointment:

I finished the J.B West memoir and the underlying  message is that the work of the White House staff goes on no matter who lives there and once families change, the transition is total and complete. Plans are made between the incoming First Lady and the chief usher before moving day so that when the new family enters the building for the first time after swearing in, their possession are in place and the private living quarters are all set up and ready for them with no trace of the previous family whatsoever. After the Kennedy assassination, Jackie asked Lady Bird for a favor – to let the nursery school on the third floor continue until after the  Christmas holidays. That way the transition for Caroline and the 19 other children would seem more natural than just stopping things the day the Kennedys moved out. Lady Bird agreed and that brings us to this sad passage:

That must have been tough for a little kid – her position slightly off-center in the spotlight came to a sudden end along with everything else and the one home she knew was now a lonely place where she was ignored. She was unfriended in RL at age 6.

This is the saddest passage in the entire book.

I lost the copy of the LBJ book that my BFF gave me for my birthday. I’m sure ti will turn up somewhere – in a suitcase or tote bag or maybe it fell behind the dryer. In the meantime, I’m rereading Doris Kearns Goodwin’s Lyndon Johnson and the American Dream. This is a totally different kind of book than the Caro tomes – Kearns paints a portrait of a human being rather than a historical figure, but it’s a giant-sized human being who is more like a force of nature than a mere man.

There’s so much that I’m drawn to about his personality and right in the first pages of the prologue is one more reason: he was a Fresca fan.

Here’s a charming little anecdote about LBJ’s Fresca Summit in the White House. It’s billed as “a great Kennedy (no not that one) anecdote” but it’s really a story about LBJ’s skill at dominating the room.

Burke and Ted prepared their presentation for Johnson and then sat with him in the Oval Office. As Ted began his remarks about the failure of the United States to win over hearts and minds of the Vietnamese, Johnson cut him off.

“Now wait a minute, Teddy,” the president drawled. “There’s no need to rush on this. There was something I wanted to ask you first, and then we can get down to what you wanted to say.”

“Teddy,” Johnson said, pausing for effect. “Do you want a Fresca?”

As Ted tried once more to deliver his report, Johnson again interrupted and turned to Burke. “Dave, would you like a Fresca?”

“No thank you, Mr. President.”

Johnson smiled. “Good, good. Now that’s good.” He turned to his butler. “David and I will have a Fresca.” He waited several beats before adding, “Teddy doesn’t want one.”

FYI – he also loved tapioca pudding. As do I.