Hey you guys look at this- I can go out on my deck again. 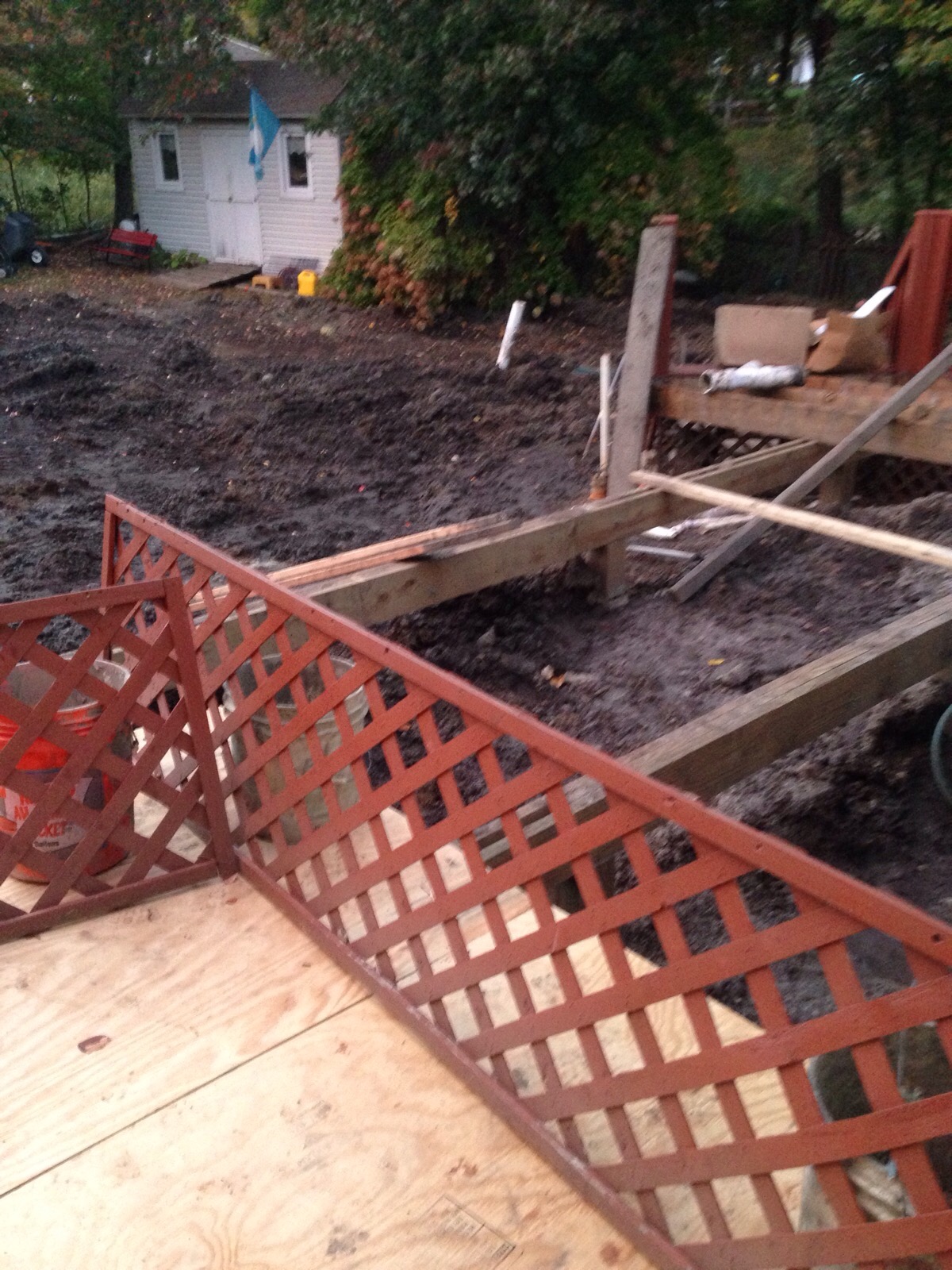 As much as I love my deck I must say at the moment I love the steamy soapy shower I just took after 4 days without a water heater.

At this point the way things are going around here I wouldn’t be at all surprised if the shingles stood themselves up and walked off the roof.

The consequences of the dreary creek project drag on. I really don’t care to discuss it  or truth be told, even think about it but I would like you to know that I made the local papers this week. Here’s a clip from the on-line version:

Great news! We bought two Bloodgood Japanese maple trees to plant on our side of the creek edge for the purpose of blocking out the lookyloos. We only need to do two things until we have some small degree of privacy back:

We have little saplings of these growing randomly around – mostly tangled in the massive rhododendron bushes in front  and the plan was to try to dig them out, but these were only $13 from Aldis and they will be so much easier to plant and will have a better shot at a long life. Although I don’t know. Last fall, we transplanted the one you can see above the pillow of the  chair on the left. It immediately dropped all of its leaves, so we figured it was dead and didn’t water it or care for it in any other way. It was late to sprout leaves but there they are. so who knows. The will to live, I guess.

Speaking of planting things on the other side of our dog fence, can any of you recommend a fast growing shrub with giant thorns on it?

Guess who came back? The adult yahoos from the house behind us! Remember when they went down into the creek last year to drive golf balls? Well, they came back and brought young teen yahoos, small boy yahoos and one slightly-built yahoo in a motorized wheelchair. 10 yahoos in all.

After Easter dinner was over at their mother/grandmother’s house, they brought out the clubs and headed for the creek. Since the creek is now fenced on three sides, they came onto our property between the dog fence and the creek and pondered out loud what they were going to do since the creek has about 6″ of stagnant rainfall in the bottom. As they discussed what to do, one of the adult yahoos swung his club next to my little tree and propelled dirt clumps down into the creek bed and a young teen yahoo stood on the inside of the black fence on the narrow strip of concrete wall. His yahoo sneakers were more hanging over than standing on so he braced himself by clutching the fencing as he leaned in and out.

I used the Calm Mom voice, which I know drives everyone crazy in a bad way – and I was even wearing an apron and wiping my hands on a dishtowel – as I came out onto the deck and said “Hey guys! We’d appreciate it if you don’t go down into the creek. That’s our property and we don’t want to take any chances that someone could get hurt climbing in and out of it.” The conversation then took an interesting turn and the alpha yahoo quizzed me about where my property ended on the other side of the creek and how far north and south it extended.

The yahoos took a few more swings at my sod while muttering that they didn’t believe what I told them about the property lines and then they shuffled back where they came from while I cheerily Calm Mommed “Thanks for understanding!”

I told him that my line was at the top of the far wall of gabion. It’s quite a steep angle on that bank, but it didn’t stop a young teen yahoo from climbing the split rail fence and standing with one foot on the gabion while trying to drive a golf ball straight up into the air to get it out onto the empty lot. When that turned into a fruitless proposition, about half the yahoos tried shooting the ball in the empty (except for dog poop) lot towards their mother/grandmother’s house while various other yahoos took turns speeding the motorized wheelchair up and down  the street. At one point, I think I saw the mother/grandmother -grey hair aflyin’ – taking a turn. One small boy yahoo climbed the neighbors ornamental pear tree and picked off some of the new leaves.

They made a stab at trying to line up shots in the mother/grandmother’s small backyard. Really, the yahoos need better plans. And then soon enough, car doors slammed , loud goodbyes were shouted and that was the last we saw of the yahoo golfers.

Oddly enough, The Poodle laid low while the yahoos made their presence known and did not come round to gawk at the creek, stare at my deck or examine the split rail fence closely.

Mother’s Day is coming and the yahoos always have a loud outdoor party in July. (No golfing then – the sport of choice is to aim fireworks at our roof.) Sooner or later, the yahoos will be back. So I need some damn shrubs with big thorns on them to block off access to where the little tree is. The bigger the better in terms of thornage. What can you recommend?

This morning, I struggle out of my blogging coma to report an event of great excitement: The creek workers have returned and they brought two truckloads of shrubbery with them.

They won’t give any shade and so far they seem to be all one type of arbor vitae – which I love but I question the lack of foresight in the selection of single specimens over mixed varieties – but they will effectively screen the dog walkers and looky loos from Stedman’s line of sight and cut down on the overall amount of aroo-ing that goes on here. And so I am officially thrilled.

Also, deer are the new rabbits. Look what they did to the branches of my mature bushes over the winter.

On the right side of this photo, behind the bare tree branches, you can barely make out the round, dark head of The Poodle talking to a creek worker in a green vest. He’s probably asking  how soon he can bring his dog around to pee all over the new shrubbery.

This is not going to reduce the amount of barking around here sad face but if the good Lord is willing AND THE CREEK DON’T RISE I’ll live long enough to see these grow tall and fill out.

I am somewhat less excited than I was three hours ago.

Or maybe I killed myself. Okay – I get it. I will just carry on with the roseification of my bedroom in blog silence from now on. And no more latex orchids!

Here’s some news: the creek workers are back today to deal with the lingering aftermath of the creek project. Today’s itinerary includes the unintentional digging up of our sprinkler system and some more damage to the roots of the oak trees which I personally raised from little acorns.

Later on, an enormous dump truck full of dirt will back up into my driveway and smash the concrete sidewalks.