Come with me now way back to the early 1970s. I’m a 20 year old RN with few expenses and earning an adult paycheck. One of the first luxury purchases I made was a large book of black and white photographs by Diane Arbus. Every page was a world to stare at and absorb but there was one image in particular that I frequently think about until even now. Maybe it made such an impression on me because most of the photos were intense studies of oddballs, outright freaks or hard-to-look-at people who were disenfranchised by “normal” society.

This particular photograph was of a very, very beautiful – picture perfect, as it were – blonde woman laying on a luxurious chaise lounge in the middle of a vast empty lawn. She was alone, surrounded only by that perfectly manicured grass. Her hair was a blonde bouffant flipped up at the ends, a thing I could never achieve. She wore a high end bikini , a thing I could never afford. She was attractive and slim and had a perfect face, a description that would never apply to me then or now.  My head was stuck in my past even then.

The overwhelming impression this image generated for me  was emptiness, isolation and boredom. It was  more than an impression – it was a deep feeling that I immediately recognized and understood. If she with her looks and money and pampered leisure could not be happy, what hope would there ever be for a schlub like me? Even so or maybe in spite of this awareness,  it gave me a kind of peace to know that a life like hers existed somewhere beyond the bounds of my own modest circumstance.

A little googling turned up the image. It’s not exactly how I remember it.

A Family On Their Lawn One Sunday Afternoon in Westchester, NY  1964.

I’m telling you this now because after more than a year of holes, sandy dirt blowing around and uneven surface in the backyard, I now have a lawn. It’s made of the wretched St Augustine grass but it is green and lush and enviable.  Apparently, there’s a small weather window of suitability for laying sod in Florida and for once, something went right.

The perimeter of grass outside of the pool enclosure is not expansive. I had my landscaping plans made up long before the site was ready – that gave Sami enough time to work me over about the south side of the cage. He insisted that this side, the side that goes to the manly Provence of Pool Equipment area, be completely unobstructed. One side  of the cage is connected to the house, two sides are planted and growing according to my vision and the south side is bordered by a simple strip of river rocks. In the 15 feet between the rocks and the fence, a level carpet of emerald blades has taken hold. Every time I lay my eyes on it, I think of that Arbus image.

I don’t think of the empty feeling – only the envy I had of that perfect imaginary world I remembered. I’ll never have a bouffant hairdo or a perfect face, let alone a body that would look good in a bikini, high end or otherwise. But here we are 45 years later and I’ve got a little piece of that falsely remembered perfection of  Westchester, NY 1964. 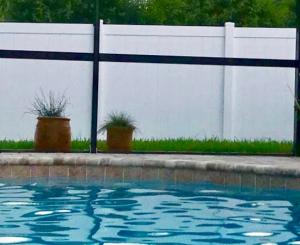 Edited to add: I just realized that this photo is probably responsible for my otherwise unexplainable devotion to wooden patio furniture of a certain type.

2 thoughts on “Suzette On Her Lawn One Evening In Florida”

AS A RESULT OF THE RAIN I suppose that I won’t be needing this patio umbrella today. #floridalife #raindrops #patterns #screenhouse #poolcage
me rn. #parody #ButTrue #SendHelpNow
MORNING LIGHT I mistakenly added half and half to my morning coffee instead of 2% milk and now the whole day is ruined. #coffee #firstcupoftheday #blech
THE ONLY PICTURE I TOOK of our delicious dinner is this one. If we didn’t eat every morsel, I could have shown you sautéd local shrimp in wine sauce, silver and gold sweet corn, blanched zucchini rounds and cucumbers in sour cream. I’m only telling on myself here because my close friends are laughing at my exposure. For years, I’ve gotten away with telling people that I forgot how to cook until it became true. This stay-at-home business has had me producing 3 squares a day FOR THE MAN I LOVE. My body memory just kicked in and now -*gulp*- I’m producing delicious meals again. It’s going to take me at least 5 years to reverse this unwanted development after the new normal becomes the previous normal. #cooking #thefoodoflove #localshrimp