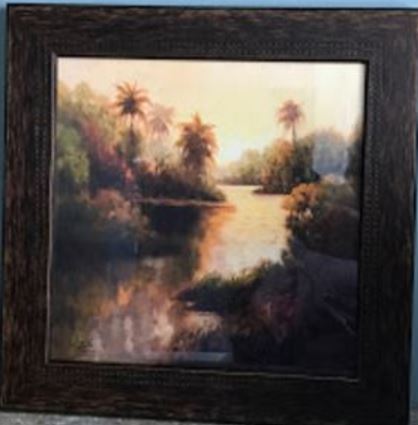 The day after the movers packed up the truck in NJ, I had to go to Denver for a business meeting but alas! the movers were so fast they packed my suitcases including the one which had my 2 best business outfits, all of my $$$ makeup and the good hairdo stuff in it. So I had to buy a new suitcase, wear rags on a business trip and paint myself with the leavings of old makeup things that I had already put into a trash bag. [Update:  my makeup and I are reunited.]

I had everything timed to precision when the meeting ended. I had the earliest possible afternoon flight booked from Denver to Jacksonville with a brief layover in Houston. Alas! The outbound plane in Denver had a mechanical problem that delayed takeoff for near an hour so naturally, I missed the connecting flight. By this time, it was almost 8 pm and nothing on any airline was headed to Jacksonville until the morning. United did a great job of getting me on the first flight out even though that was on American. I was steeling myself for a night spent upright at the gate when, unasked, the customer service person handed me vouchers for dinner and breakfast and set me up at what turned out to be a fairly swanky Sheraton for the night. So even though I had mentally prepared to spend 10 hours without laying down or touching anything more than necessary, in reality I enjoyed room service and a nice steamy shower. My checked luggage even ended up on the American carousel and was waiting for me when I got there.

The only loser in this whole episode was the movers (alas!) who showed up as arranged at 7 am on Thursday. They didn’t get the message that I would be delayed even though their office got it on Wednesday evening and even said they understood and would send the van come at 2 pm. They did come at about 3:30 pm and worked like whirling dervishes to get the truck unloaded and furniture placed. They were done by 9:30 pm. I was unpacking the kitchen as they were bringing boxes in. Even though I was making good headway and got about 14 boxes empty, there was no discernible difference in the amount of visible floor space because the full boxes had only transformed into empty boxes of the same size. In the most serendipitous happening of all, at around 4 pm a message came in on our homeowners website from a person looking for moving boxes. We connected and the person picked up a dozen boxes today and will be back tomorrow for more. All I need is the stamina to keep steadily unpacking.

So it’s a mess here but it already feels like home. The decorating plans that I had only imagined in NJ are looking really good as I set them up one by one. And I do mean one. So far, it’s only one pineapple lamp and a single 11″ x 11″ piece of wall art. But they look great!

Also, lanai is the new deck.