Flying out to Florida tomorrow . I don’t know if I’ve ever been to Jacksonville Airport before, except for that time we went to spend Thanksgiving with Sami’s brother. I believe that was 1982 or thereabouts.

To prove to you that I’m really serious about preparing for the move ahead of time instead of the usual last-minute scramble that goes on around here, I was digging through a rarely-used drawer today and found this under an envelope full of pay stubs from 1997: 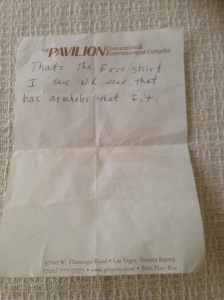 I have no recollection of who N.R. is or why I saved this note. Neither can I remember writing it but that is definitely my printing and it’s totally in character for me to be writing goofy notes like this. During a business meeting.

Also, it came to me over the weekend that I’ve been moving towards British Colonial decor my whole adult life. The pineapples, the cane, the rattan, my affinity for dark wood and so on. I’m relived actually that my inclination has a name. Also thrilled to find out that not only is it a thing, it’s a big thing. Big enough to be a search term, big enough to have pins or boards or whatever goes on at interest which as you know I previously despised but am now in love with. Enjoy the world of butler’s trays and contemporary knockoffs of military field furniture!

CHRISTMAS HAS MOVED OUTSIDE #floridalife
I NEED A SUCCULENT CONSULTATION PLEASE @sucsinjax My flapjack has produced two pups and I don’t know what to do! Will they all thrive if I keep them in place or must they be removed to prevent overcrowding? I’m imagining leaving them and eventually looking at a big round flapjack bouquet growing in that pot. Please advise. #succulents #flapjackplant #floridagardening #containergardening
SHELTER IN PLACE we’re still free to move about here in NE FL so today I braved mixing with the panic hoarders to stock up on one particular comfort item. My experience over the last 14 days of self isolation is that the liquor store was much much busier than the supermarkets. #gin #hendricksorbium #mcqueenandthevioletfog
NO NAY NEVER (1-2-3-4) NO NAY NEVER NO MORE St Patrick’s Day in Florida is crap especially when the bars and big private parties are closed down because of C19. I content myself with watching Barry Fitzgerald’s 200 year year old mother walk up the center aisle of the church to give his 80 year old ass a hug. Also watching YouTube videos of the Clancy brothers, the Cheiftans and (*gag*) Pete Seeger butcher the Wild River. It’s all we have have left now. #wildrover #jogopoteen #toorahloorahloorah #goingmyway #covid_19 #jugopoteen